RSS Feed
← Dawn Raffel – In the Year of Long Division, Carrying the Body, Further Adventures in the Restless Universe
Stories Up to a Point — Bette Pesetsky → 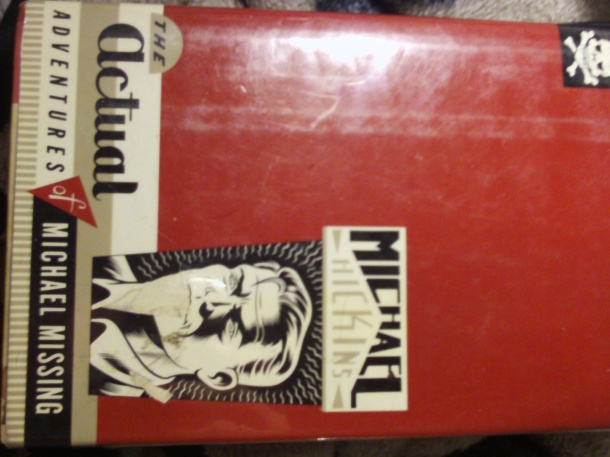 One of Michael Hickins’ stories from The 1/4ly issue 13, “Summer Romance,” has stuck in our mind like old bubbergum on a used Reboks, a story we have re-read many times over the years, have read out out loud to family and lovers and enemies alike…and why? It’s a fine story, but is it great? Perhaps, when we first read it in 1989, we were in a place of life that resembled the events in Hickins’ story.

Every 1/4ly Hickins story was a treat from then.

We must have missed the 1991 publication date of The Actual Adventures of Michael Missing, because we did not find a copy, or bought one, until a decade later, in a remainder bin…a fine specimen of cover art by the unsinkable Chip Kidd, who did many wonderful covers for half of Lish’s Knopf books, plus 1/4ly covers.

Most of the nine stories in this slim volume (127 pages) were first seen in The 1/4ly; Lish had the manuscript since 1987 and its trip to a 1991 publication was no easy task, for writer and editor.  The stories may seem “different” from what Lish usually acquired, their atmosphere and sensibility grounded in the hardboiled crime genre, but with a slipstream feel, transcending the genre cubbyhole.

One might categorize this volume as a novel told in stories, akin to Sam Michel’s Under the Light that Lish published in 1991.  The nine tales are all told by “Michael,” a young man whose adventures include playing baseball, wielding a gun, having incestuous moments with aunts and cousins, and other kinky sexual encounters.  To say “coming of age” would not be untrue. Look at this from “The Last Donna” and how young Michael narrates the beginnings of his fetish for a woman’s feet:

The next time, Mrs. Klein seemed to know what I wanted.

“Take your pants off,” she ordered.

She lifted her dress over her head and kept hr bra, red panties, and pumps on.

“Is this what you want?”

She pointed her foot at me and said, “Lick it with the shoe on.”

I licked th smooth red varnish on the big toe, and then the instep laced with thin blue veins. Then I took off her shoe.

In “Summer Romance,” MM pontificates about a group in a community house in San Francisco:

They talked as if the 60s were still going on.

They talked as if everything had just ended. As if there were fresh scores to be settled. As if it still mattered who was right. As if apathy was still the major obstacle we were all talking about.

Nostalgia for when they were just starting to be nostalgic.

Rubbing the sands of time in old wounds.

The book ends with a longish story, “The Profound Convictions of Michael Famous,” where a ten-year-old Michael seems to work as a hitman — who would ever suspect a kid? Or is he a kid? Maybe he just looks young, and he ages a year every week.

We had the chance to correspond with the actual Michael Missing (and Michael Famous) a few years ago. He told us the curious adventures the manuscript of this book took, and how through Gordon Lish, he became a husband and a father…with his kind permission, we reprint the email Mr. Hickins sent, one that we are sure you will find informative and entertaining:

Gordon Lish used to teach at Columbia when I went there, both in college and grad school (79-83; then 84-86), and he had a rep for being a real asshole and not helpful to writers who didn’t suit his idiosyncratic style, so I avoided him studiously. I lived in France from 85/86 through 1997. I wrote the Michael Missing stories there and started trying to sell the collection. I would get rejected and write back to the editor saying, “well, thanks for reading; thanks for saying this is good but not for you; who do you think it might be good for if not you?” They would always reply with a name, and I would write to that person, saying so and so suggested I send this to you. Eventually I sent it to someone at Dell, a Jane something, and I said, I’ll be visiting NY in September, so I’ll drop by and see you. I guess people felt obligated to deal with me nicely because I was living in France. Anyway, she met me with the same story and suggested I send it to Gordon. “He likes young writers,” she said.

He later told me he called her to thank her for sending me along. “She said, ‘oh I thought it was the worst thing I’d ever read, but I didn’t know what to tell him, so I sent him over to you.'”

Gordon loved telling me that story.

He often asked me to take his classes–he said he wouldn’t charge me–but I never took him up on the offer. I had a kid in France to support and, besides, I was still wary of him getting too far inside my head.

But we got along very well for a time, and he of course supported my writing. He told me that he paid me more for my stories than anyone else (it was $100 rather than $50), and he really went to the mat for me once Sonny Mehta took over at Knopf. They did not get along. After awaiting approval for my book, Gordon finally told me he wrote Sonny a memo saying that unless he heard otherwise, he was going to go ahead and publish the book. And that’s what happened.
Aside from Backswing of the Slugger, and the final Michael Famous story, both of which he edited and cut back a little, he left most of my stories completely untouched.

When MM came out in the spring of 91, I came to NY to do a reading he had arranged for me at the New York Public Library. There must have been two dozen people present, including folks who came to see the other person on the program read, and a few homeless people who were sleeping. My agent at the time was Kim Witherspoon (Gordon recommended me) and she brought a few of her clients–Bill Tester, Peter Christopher, Diane Desanders among others.

We all went out for drinks afterwards, and Diane, who had written a story called “The Fucking Fuck I used to Fuck,” approached me and said her “race car driving, French speaking daughter” and her wanted to open a restaurant in France, and could they come and buy me dinner and pick my brains about living in France and such.

I said sure, and that fall they came and I met Molly. Now, at the time, I was in the middle of breaking up with my son’s mother, so nothing came of that except for dinner. But a year later, I went back to NYC for vacation and called Diane to reciprocate and ask her out to lunch. She offered to make me lunch at her place instead, and said that Molly was around and invited her too. During lunch, we talked a little about Gordon because Diane was taking his class, and he was acting strangely, and wouldn’t pull the trigger on her book. He kept asking her for the key to her apartment. She’d say, ‘what do you want it for Gordon?’ and he’d say, ‘you know what I want it for Desanders.’ No I don’t, tell me, and so forth.

Well, I walked Molly home after lunch and that was the last anyone saw of me that week. We decided to get married and do the restaurant thing together. I had an appointment with Gordon and went to see him, of course, flying high on sex fumes and other delirium. I sauntered into his office and plopped myself on a chair. “Hey Gordon! You’ll never guess whom I’m going to marry and open a restaurant with! Molly Elliott, Diane Desanders’ daughter!”

At which point Gordon half-rose from his chair behind the desk, pounded his fist on the table and said, “How come you get to have the daughter and I can’t get the mother?”

I kind of laughed and maybe we changed the subject. He hustled me out of his office pretty quickly. Next manuscript I sent him (he asked me to write a novel instead of stories because “that’s where the big dogs piss”), he returned with just a scribbled ‘Good luck in the restaurant business. –G’ on a Knopf-

Back in the US in 97, Diane invited me to a party at 4 Walls 8 Windows to celebrate the fact that they had signed Gordon to a book deal for X number of books. I went up to him and said hello, and he said, “I’m sorry, do I know you?”

That was the last time I saw him, and it really hurt my feelings, because he really acted like he’d never seen me before in his life, and to me, well, he was the only person who ever validated that I was a good writer. It’s been very hard since then, because I’ve probably written 4 or 5 novels that could have been but haven’t been published. I finally published one of them myself. Sometimes I think Gordon published me because he was crazy, or because he was trying to prove a point, either to Sonny, or with the Q experiment, to the publishing industry as a whole, that literature is this giant fabric and that it can be more than the handful of people that they deign to accredit.

We have heard similar accounts, of Lish not publicly remembering writers he knew in the past, helped, published, defiled…is it faulty memory or part of Lish’s iconosclasticism?

Posted in editor, Gordon Lish, Knopf, The Quarterly and tagged Diane deSanders, Michael Hickins. Bookmark the permalink.
← Dawn Raffel – In the Year of Long Division, Carrying the Body, Further Adventures in the Restless Universe
Stories Up to a Point — Bette Pesetsky →